Why are young adults wasting so much food? Study looks at perceptions and food behaviors 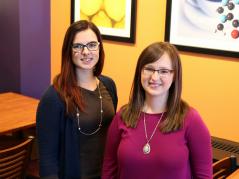 URBANA, Ill. – Globally, there has been much attention on avoiding or reducing food loss and food waste. But recent research has shown that young adults—18-to 24-year-olds—have a higher tendency to waste compared to other age groups.

Researchers at the University of Illinois wanted to get a better idea why this age group, especially those who are college students, are such high food wasters and how their residence type—on or off campus—plays a role. Findings from a study, published in the journal Appetite, show that during the transitionary time of young adulthood, many of the food management behaviors that might prevent food waste haven’t been learned yet or haven’t been necessary.

If college students have eaten all their meals in all-you-can-eat university dining halls, for example, they may have not yet learned how to plan and grocery shop for meals. Other constraints like transportation and environment—maybe no access to a refrigerator to store leftovers—may also contribute.

Results from the study can inform strategies to help young adults be more aware of food waste and adopt better food management behaviors.

Cassandra Nikolaus, doctoral candidate in food science and human nutrition at U of I and lead author of the study, says another important finding was that many of the young adults in the study didn’t see their personal food-wasting behaviors as part of the overall problem of food loss and waste in the United States, nor did they think changing their behavior could help the problem.

“We picked up on this desire to deflect. ‘It’s not me, it’s them,’” Nikolaus says. “Even with those living off campus, thinking about the grocers or restauranteurs and the portion sizes they are given, and even though we focused on individual behavior, retail-level waste came up several times,” she says.

Nikolaus and study co-author, Brenna Ellison, associate professor in the Department of Agricultural and Consumer Economics at U of I, conducted focus groups with young adults, ages 18-24, to find out more about their perceptions about food waste and their personal behaviors. Most of the participants were college students, some living on campus with access to university dining halls, and others living off campus.

Participants were asked, for example, to describe their typical meals and where they are prepared, how knowledgeable they were about food waste in America, and how they dealt with leftover food on specific occasions.

Similar themes emerged for college students and non-college students, but Nikolaus says there were differences in perceptions and behaviors between participants who lived on campus or off campus.

“The way we will need to intervene to reduce wasted food will be different based on what young adults have access to,” Nikolaus explains. “One thing we highlighted was environmental constraints. We could tell a student living on campus all day about meal planning and grocery shopping, but how much shopping are they doing if they have a tiny refrigerator, and how does that really play into their overall pattern of eating?”

A major theme that emerged was a sense of apathy about food waste, or the tendency to deflect. Many participants were not even aware of how much food is wasted, for example, in a university dining hall.

“Many said these things are out of their control,” Ellison says. “Some participants said they had not been told they need to care about this. You could tell it is not something that has been ingrained in them through school education the way that things like climate change or recycling have been.”

Nikolaus adds, “We found that several participants were very apathetic to food waste, though they probably wouldn’t put it in those exact words. They felt they couldn’t really do anything about it so they wouldn’t. This limited control led them to feel like ‘it’s not my problem,’ basically.”

Some of the themes could be applied to other age groups, but the researchers were able to identify some behaviors that might specifically apply to young adults.

“Of course people across all ages throw stuff out if they think it is spoiled,” Ellison says. “There’s some learning that happens with this age group, though, in that they’ve not been forced to cook for themselves or manage their own food. I think this shows that it is a bit more transitionary and they’ll get better as they get older.”

Part of that learning and adapting comes when young adults also start managing their own finances, Nikolaus says. “One participant said, ‘I feel like I used to waste a lot more before I started buying my own groceries.’ So that transition from being in a dining hall where things are just appearing and disappearing, in contrast to purchasing your own groceries, is important. Those food provisioning and management behaviors are primarily taken care of for you while you are in a dining hall on campus,” she explains.

The participants also offered intervention ideas to help reduce food waste within their age group. Having a visual representation of how much they are actually wasting and getting education in terms of food management—cooking for oneself, grocery shopping, and planning, combined with financial management, came up in focus groups.

“This kind of goes back to something like recycling. It took a long time for recycling to catch on and for people to understand why you would want to do that,” Ellison says. “Making sure people know what they are wasting and understanding the consequences of that is important. Making waste visible is a first step in getting anyone to think about changing their behavior, to understand that there is something that’s a problem,” Ellison adds.

Findings from the study were also used to help create a food-waste awareness campaign in U of I dining halls. “The best way to inform that campaign was to understand what motivates students to waste in the first place. To make sure we’re designing educational materials that makes sense for what this age group is thinking about related to food waste. We physically measured waste and put up a giant graph measuring their waste and giving them feedback.”

Funding was provided in part by the National Institute of Food and Agriculture, U.S. Department of Agriculture under award number ILLU-971-328.