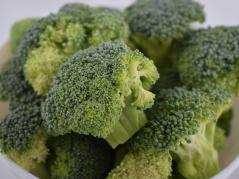 URBANA, Ill. – Along with a host of other health benefits, broccoli has been shown in research studies to play a role in slowing certain types of cancer. A new University of Illinois study shows that microbial changes that occur in the human gut microbiome after eating broccoli might be behind the vegetable’s anti-cancer power.

There have been many studies linking diet-induced metabolic and gastrointestinal diseases with imbalances in the gut microbiome. The human gastrointestinal microbiota is the collection of trillions of bacteria that reside throughout the GI tract. These bacteria can metabolize dietary components that are indigestible by human digestive enzymes, making the diet an important factor in the relationship between diet, the microbiota, and human health.

Hannah Holscher, assistant professor of nutrition in the Department of Food Science and Human Nutrition at U of I and co-author of the study, explains that while the human gastrointestinal microbiota has been increasingly linked to health outcomes, understanding how specific foods alter the microbiota is limited.

Holscher and her colleagues wanted to determine what impact broccoli consumption would have on the abundance of certain bacteria in the microbiome and to better understand their functional capacity.

Cruciferous vegetables like broccoli are a good source of dietary fiber and phytonutrients, including glucosinolates, which can be metabolized by gastrointestinal microbes. This study, done in collaboration with the USDA and the National Cancer Institute, aimed to determine the impact of broccoli consumption on the gastrointestinal microbiota of healthy adults.

“There is interest in broccoli and cancer because broccoli has been shown to slow cancer incidence in humans. This study gives us a better understanding of which microbes are creating the metabolites that have been shown to slow cancer in humans, so that we can do additional studies to see if the microbes that are increasing are part of this cancer-fighting mechanism,” Holscher explains.

For the study, published in The Journal of Nutritional Biochemistry, healthy adults consumed a diet provided to them that included daily servings of broccoli and daikon radish for 18 days, and a control group that did not consume the broccoli/radish mix.

Participants consumed cooked broccoli, but studies have shown that cooking broccoli can reduce the amount of glucosinulates and enzymes such as myrosinase, an enzyme related to releasing the cancer-fighting compounds from glucosinolates. Daikon radish was included with broccoli to mimic raw broccoli, by adding back the myrosinase.

“Because growing conditions influence the nutrients in broccoli, we chose to purchase the broccoli once for the entire study, to reduce variability. All the broccoli was mixed together and then frozen so we could use it throughout the study. At breakfast and dinner, 100g of broccoli was steamed and 10g of raw daikon radish was added to mimic raw broccoli,” Holscher explains.

Blood and fecal samples were taken on days 1 and 16, to look at bacterial changes in the microbiome.

Because the study was designed as a complete feeding study, the researchers could look specifically at the changes in the gut microbes caused by broccoli consumption.

“There have been other studies that used a combination of different vegetables, but this study allowed us to study how eating broccoli changes the microbiome. One of the reasons we study specific foods, like broccoli, is because a goal of my research laboratory is to to build menus and recipes to change the microbiome in ways that will benefit human health,” Holscher explains.

Of significant interest to the researchers was an increase in abundance of the Bacteroides genus, because some members of this bacterial genus have been shown to have myrosinase activities. “These bacteria have the enzymes to break down glucosinolates into cancer-fighting isothyasinates, including sulforaphane.

“From this study, we believe some of the changes in blood metabolites are due to the microbiota because we saw changes about five hours after the broccoli was consumed. It’s more likely that those metabolites are from the microbes than just the digestive process of humans because of the timing: most nutrients are absorbed in the small intestine, within a couple of hours of ingestion. That was an interesting finding,” Holscher says.

Results also showed the presence of sulforaphane in the blood after five hours. Sulforaphane, a  health-promoting food component found in cruciferous vegetables, particularly broccoli, is related to the prevention of prostate cancer and many other types of cancer. “What that suggests is that microbes are contributing to the creation of health-promoting food components that are beneficial for humans,” Holscher explains.

Another important takeaway from the study, Holscher says is that the amount of broccoli used in the study is a very translatable and consumable dose of broccoli, equivalent to about a cup of broccoli per day. “It would be very feasible for anyone to do this. And because this was a complete feeding study, we can say with confidence that the changes we saw are due to this broccoli/radish combination which mimics raw broccoli.”

While the study doesn’t allow the researchers to make cancer-prevention health claims related to broccoli, it does provide a better understanding of how the microbes are changed. “And since other research has shown that broccoli can slow cancer, once we put those two outcomes together in a study, we can link those together,” Holscher says.

Research is ongoing to answer the question of which broccoli type—raw, cooked, or either—is influencing these microbes.

Funding for the study was provided by USDA ARS and the National Cancer Institute.