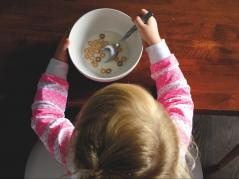 URBANA, Ill. – Recent research has uncovered more and more about the human gut microbiome, including which microbes reside there and the functions they serve. Interest in how these microbes, especially bacteria, affect health and disease has also grown.

One thing researchers have learned is that diet is one of the most influential factors in determining the composition of the microbiome. How diet shapes the composition and stability of the microbiome in young children is not entirely understood, however. Nutrition researchers at the University of Illinois are looking at possible links between dietary patterns in children and their microbiota.

“There is already research in adults that shows there are dietary patterns that can impact the microbiome,” says Kirsten Berding, a doctoral student in nutritional sciences and lead author of the paper. “We were interested to see if there were any dietary patterns in children that were associated with more beneficial microbes or more stable microbiota over a six-month period.”

Sharon Donovan, a professor in the Department of Food Science and Human Nutrition at U of I and co-author of the study, explains that by using exploratory Principal Component Analysis and Factor Analysis for the study, they were able to separate children’s diets into two groups or patterns. “This suggests that we need to look more holistically. And likely in the future it could lead to dietary recommendations that would be more holistic,” she says.

Prior to the study, Berding and the other researchers on the project hypothesized that children who ate more fiber-rich foods, such as fruits, vegetables, legumes, and whole grains, would have a more diverse microbiota that was also more stable over time. They also speculated that a diet high in animal products and processed foods would be associated with less beneficial bacterial composition that was more variable over time.

For the study, the children were not prescribed certain foods to eat, but parents reported their children’s usual food and beverage intake over the past year. The microbiota composition was determined from fecal samples collected throughout a 6-month period. Parents recorded a 3-day food diary—the types and quantities of food consumed—for their children before each sample was collected.

Statistically, a consistent dietary pattern can help provide a better picture of what is going on in the microbiome, Donovan says. “The nice thing about this approach is that we didn’t try to push foods into groups. We basically gave the information we collected to the computer, and the computer said these are the dietary patterns and these are the microbes they are associated with.”

In addition, based on the patterns, two distinct microbial profiles emerged.

Specific bacterial families were present in the microbiota in higher or lower levels, based on the dietary patterns, as well. Berding says they noted the presence of Bifidobacterium, Prevotella, and Roseburia, which are typically related to health benefits such as immunity and protection against pathogens.

Lower levels of Clostridiaceae were also observed. This is a bacterial family of potential interest in relation to autism spectrum disorder (ASD). “Identifying dietary patterns that could impact some bacteria of potential importance in ASD symptomology could potentially be a future avenue for alleviating some symptoms of ASD through diet,” Berding says.

While the children involved in this study had no health concerns, Berding and Donovan will use the same method in looking at children who have been diagnosed with ASD. Previous research has suggested some associations with microbiota composition and the severity of autism symptoms.

“Looking at the dietary patterns in children was a unique approach,” Donovan says. “This gives us insight in that, now that we know the types of foods in the dietary patterns, and the nutrient composition of those foods, we can ask those more specific questions about if we were to intervene and change something. If we had kids eating in one dietary pattern and we shifted that diet, would we be able to see a shift in their microbiome? It gives us information that makes it a possibility to use a personalized nutrition approach, formulating diets that are geared toward health needs.”

The paper, “Fecal microbiome composition and stability in 4- to 8-year old children is associated with dietary patterns and nutrient intake,” is published in the Journal of Nutritional Biochemistry. [DOI: 10.1016/j.jnutbio.2018.01.002]. Co-authors include Kirsten Berding, Hannah D. Holscher, Anna E. Arthur, and Sharon M. Donovan. Donovan, Holscher, and Arthur all are in the Department of Food Science and Human Nutrition, and Berding, Donovan, Holscher, and Arthur are all affiliates of the Division of Nutritional Sciences, in the College of Agricultural, Consumer and Environmental Sciences at U of I. Arthur is also affiliated with Carle Cancer Center, Carle Foundation Hospital.

Funding was provided through a Vision 20/20 Hatch grant.